How do you know if a pirate is coming to your wedding?
They send an AAARH-SVP.

What will a pirate eat at your wedding?
AAARH-d’ourves

One more. Where does a pirate go for her bachelorette party? A BAAARRRHH.
True that.

I should have been worried when I got a pirate-themed invitation earlier in the summer, but I really had no idea just how far my sisters would take it. Pretty far, it turns out.

Once we arrived at camp and had a wander around, we spent Thursday afternoon doing all sorts of wedding prep as our families arrived. After a yummy pizza dinner and birthday cake for my nephew and FIL, I was whisked away by my bridesmaids and bridesman for my bachelorette party.

It started off innocent enough at a secret bonfire where we played a panty game, to the utmost discomfort of Little Veggie Bro. I was presented with panties galore and this fantastic pirate outfit.

My birdesmaids convinced me that I should go ahead and put on the outfit. I wouldn’t be alone. They were going to dress like pirates too. Ummm…yeah, they had eye patches, swords, and cute little black dresses. I had a freaking pirate’s costume. Unfair? Perhaps. But you’re only a bachelorette once. I felt like Lindsey Lohan in that scene in Mean Girls, a gnarly pirate amongst cute pretty pirates.

After a not-so-brief limousine ride and copious amounts of beverages, we painted the town.

Safe to say that the Scranton locals were not accustomed to a band of merry pirates frolicking in their fair city. They didn’t take to us too kindly. We were actually turned away from the only bar in Scranton that we could find that might be classed as a nightclub because they wouldn’t let us in with our “weapons”. Um… we’re not real pirates dude. And these aren’t real swords.

Oh well, all the better for us, because we found a local dive somewhere between Scranton and Honesdale that had kareoke. Have I told you how much I love kareoke? A lot. 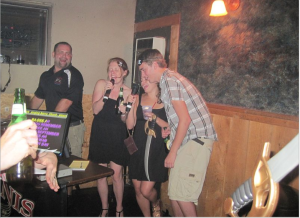 Apparently it runs in the family. This bar was everything you could ever hope a local bar would be. Fellas who look like they had been on the same bar stool for weeks. Ladies who could very likely beat Mr. Veggie in an arm wrestle. Honestly, I didn’t know that there were still bars where you could smoke inside. Not only did we get cheap drinks, and maybe a free round or two, but I even got a wealth of unsolicited marriage advice. I think some of the Veggie Sisters may have gotten marriage proposals. And on and on the night went…

…and so that’s how I ended up slightly tipsy in downtown Scranton trying to storm a castle with Veggie Sister Carrot (using a beer as a weapon?).

Those Veggie siblings sure do know how to have a good time.