After looking at last week’s column, I must hand it to the Chronicle editors for their mastery of the pun when writing captions for photographs. I thought I was good at word play, but I can’t handle a candle (you see there, that’s alliteration) when compared to the punsters in their new offices at the corner of Guyton and St. Hill streets. I doff my cap-tion to you, sirs and madams of our local press.
But in the world of puns, allusions, and similes, in the words of David St. Hubbins and Nigel Tufnel (This Is Spinal Tap, 1984); “It’s a fine line between stupid and, uh…”
“Clever.”
While this week’s column addresses many things vintage, it seeks to do so only with respect.
Among the many values we hold dear to eco-thrifty renovating and living is seeing potential value in building materials no matter their age or surface appearance. We have found time and again, that below the rough surface of many a piece of 100 year-old native timber beats a heart of rock-solid, tight-grained integrity.
We have re-used beautiful, durable native timbers in many ways throughout our renovation. One of the latest examples – and last touches to our nearly finished home – is the threshold at the front door. Regular readers will recall I recently made reference to the fact that on day one (also on day 1,000) we had a gaping hole beneath our front door where one would expect to see a sloped sill, or some such piece of timber. 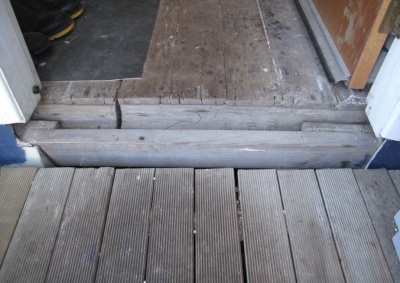 No Joke: No Hearth
But no – just a hole that remained until I got to item number 1,478 on my list of things that needed to be done to the villa. In April of this year, I tracked down one of the original windowsills that we had removed and tucked safely away in October, 2010. As plainly seen in the first photograph, its surface was worn and weathered from 100 years of Whanganui storms, showers and sun. 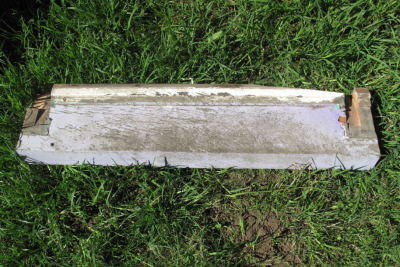 Old window sill
But beauty is only skin deep, and integrity comes from the heart, whether it is heart rimu, or another dense, native hardwood. After 100 years exposed to the elements, the sill had not a single borer hole of speck of rot. I cut it to length, and ripped it to width, nearly burning out the motor of my saw.

Hard-as timber
In houses and in human beings, there are those that look nice on the surface and those with integrity underneath. Some may have both, some may have neither, and some may have one or the other. Personally, I’d rather surround myself with walls and with people of integrity no matter how they look.

About two hours later
As a culture, we often disregard what is old, dated or worn. Often times our seniors feel the brunt of this ‘youth bias’ and may feel neglected, unwanted or of little value except when holidays come around and they find themselves surrounded by family for a brief period of time.

Eco-thrifty Christmas tree
But for those seniors who may not have family nearby or even in the country, the holidays may be especially lonely or depressing. With this in mind, we would like to invite any seniors who may find themselves alone this Christmas Day to an afternoon tea at 10 Arawa Place, Castlecliff, from 2 pm to 4 pm.

Fully decorated
We will have a platter of biscuits and a bubba that enjoys cuddles. We’ll have a grand, old time – no pun intended.