Eco Thrifty Baby hit the big 18 month mark a few days ago. While tidying up her room I realized that the same bunch of toys had been in heavy rotation for a while, thanks to getting prime position on her shelves, rather than tossed into the basket. Time to switch things up, I suppose.

Looking at her toy basket, I was having a hard time finding lesser used toys to promote. I feel like we have enough toys. I would even say we have a lot of toys. But compared to most play rooms our stash probably looks small. But, I don’t really want to run out and buy her any more toys. Quality over quantity, right? So how do we keep her stimulated and engaged using the toys we have?

Well, ETB has long been an afficionado of containers. Tupperware and recylcing being two of her favorite varieties. She also lately really likes matching and puzzles. So, to make use of some of her toys in a new way, I created some sorting bowls.

I gathered a variety of objects, each in multiple colors. Put everything into some wooden bowls we found at an op shop ages ago. And voila! A cornucopia of colorful, sensory, brain working stimuli. 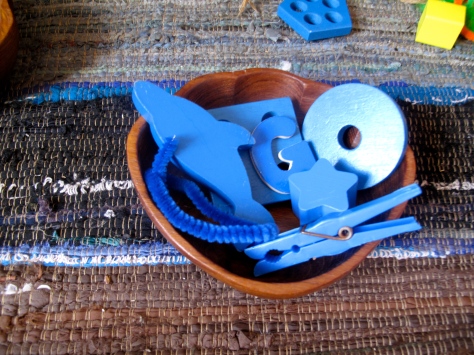 Of course, ETB promptly came in and dumped everything out all over the floor. But then….

We started putting things back into the bowls together.Me picking up objects and handing them to ETB to put in a bowl. I still had color on the brain, but ETB started sorting by type of object. SHE’S A GENIUS!! Well, maybe not. But I was super impressed. We sorted and dumped for about a half hour. Almost a week later she is still really into it, although she gets angry at me if I try to put things into the “wrong” bowl. Sometimes its hard to tell her method, but I am sure that orange necklace and blue clothes peg have some similarity that I wasn’t seeing. (Silent “e” perhaps?).

I am sure that educational theorists would say that this is teaching her brain how to categorize and conceptualize and blah blah blah. What I know is that it meets a deep need in her to order things and tidy things (a need I don’t have an ounce of). It also seems to be keeping her out of our recycling for the time being.