I’ve joined a wedding website called WeddingBee and have been posting a bit over there. Since I have been a little delinquent about filling in the details of our engagement (!), I thought this story would be a good start:

Mr. Veggie Farmer is good at many things. Ok, he’s so good at so many things that it can drive (Soon-to-be) Mrs. Veggie Farmer a bit mad. But the one thing that he lacks is good common sense about fashion. His style might be best described as “Functional Salvation Army” (but that’s why I love him, right?).

You might say that Mr. Veggie’s proposal was a bit of a surprise for both of us. So much of a surprise that the day he popped the question he hadn’t bought an engagement ring yet. Riding bikes back to our house (Soon-to-be) Mrs. Veggie found herself wearing a big smile and the ring from the key chain of our bike lock.

We are simple folks who like simple things, but even Mr. Veggie Farmer could see that we needed a slightly more suitable engagement ring. The only criteria we had was that we wanted something ethically and environmentally sound. I also wanted something that I could wear every day without worrying about getting bits of compost stuck in it, or snagging it on a chicken feather as I put the girls back in the coop.

He wanted to go out himself and find something special, but in my mind all I could think about was the aforementioned affliction that Mr. Veggie has when it comes to fashion. Is there a tactful way to say “That flourescent orange rock may be eco, but it doesn’t go with my eyes?”.

Luckily we live in a town full of artists with several jewelry boutiques. We decided ride down to town together, and then split up to see what we found. We went into stores that were right next to each other and five minutes later Mr. Veggie came to find me. He had found the perfect ring. I was skeptical, to say the least, but when I saw what he had found I knew it was perfect. Of course I still had to go to every other boutique in town to see what they had to offer, but he was right. He had found the perfect ring in five minutes (how did he do that?).

My ring is made by Ash Hilton from Nelson, NZ, which is about 300 miles from where we live in Raglan, New Zealand. He crafts the jewelry himself using ethical metal that he has either reclaimed and melted down or mined himself from the black sand beaches on the South Island. Nelson was drawn to a silver ring etched with a design of wind-blown grasses because it reminded him of the spot where he proposed(cute!). I loved the silver, but that particular ring was a bit too big for me. Because Ash is a somewhat local artist, we easily could have had him make us that ring in my size, but we were on a bit of a time crunch since I was travelling home to see my family in just three days and wanted to have the ring before I left. Also, I was more drawn to another ring that had trees etched into it. And so without further ado here is my ring: 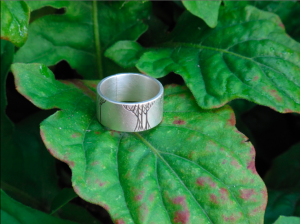 Things we learned about buying a green ring:

– Finding a local artist not only reduces the carbon footprint of your ring, but can help remind you of a special place.

– Ethical metal does not have to be expensive.

– A diamond doesn’t make an engagement ring. Although we ended opting for no stone at all, we thought about having a greenstone ring (a locally-available and culturally significant stone in NZ).

– And finally, Mr. Veggie Farmer does have some fashion sense! He was just waiting until the right time to let it show.