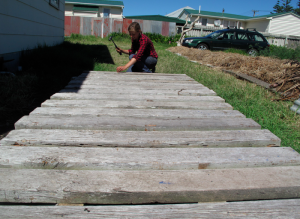 Reusing items normally destined for the recycling center is something I have always been fond of. There is something satisfying about repurposing, say, a cardboard container that once held Brie cheese, into a pretty box for presenting a gift of Christmas chocolates. Until the advent of my experience here in New Zealand, this was basically the extent of my creative repurposing: pretty small-scale. At the ECO School, though, our projects involve reusing materials on a large scale.
My first major recycling project also coincided with my first demolition experience. There used to be a raised deck extending along the entire front of the house, but several holes rendered it unsafe to use. So, we got to work with pry bars and disassembled the entire thing. The wood, though weathered and rotten in a couple spots, was saved for reuse in projects where structural strength wasn’t a primary concern. It was neatly stacked in a corner if the yard, as well as the recesses of my mind…
Then, this Tuesday, I had the opportunity to undertake my first solo construction project: building a fence. This wouldn’t be just any fence, though: it would be a permaculture fence, serving multiple functions. First, it would allow our duckies to roam free in the yard, fertilizing and eating bugs. It would also serve to keep neighborhood dogs out. Finally, it would serve as a trellis for climbing plants like passionfruit, and its north-facing orientation would provide them the direct sunlight they need. This project was also a perfect reuse of the wood we’d saved from the deck demo, as it had an appealing weathered look and was sound enough to make sturdy fence pickets.
The new fence was to be attached to an existing post buried on the property, but upon investigation (read: John digging himself into a meter-deep hole), we found that this post was not only slanted, but also broken deep in the ground. We decided to replace this post with another reclaimed pile, and saved the broken post for another incarnation. Taking this extra step would ensure the integrity and longevity of our system, important considerations in permaculture designs.

Now, let’s talk about building this thing. First, we measured approximately how long the fence would be, and compared this to the wood we had available to use as rails. From these rails, which were the somewhat rotted supports of the old deck, we cut the longest possible sections of sound wood. Although they weren’t the perfect length, they were very close, and we decided we could make up for a shortfall later when we built the gate. 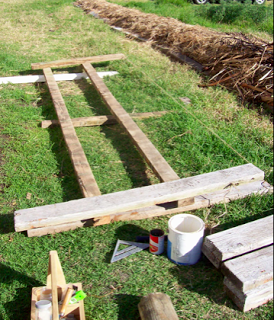 Rails are aligned and ready for pickets

Close-up of the string level

Next, I took the two rails and secured them to a board at either end, ensuring they were equidistant and parallel, as well as creating a stable surface for attaching the remaining pickets. We ran a string between the tops of the two end boards so that we could easily keep the top line of the pickets level. Then I got to work predrilling holes in the old deck planks which were to become the fence pickets. Securing each vertical board with four nails, two in each of the two rails, would keep the fence square and prevent shifting from side to side. So, I spent the next few hours in a Karate Kid-style fence project, but instead of perfecting my painting skills, I became learned in the ways of using hammer and nail.

Tools of the trade

When my creation was finally complete, I paused to admire my handiwork, then elisted the help of the menfolk to put that beast of a fence in its final location. At one end, we secured it to the new sturdy pile we’d buried in the ground. And the old post we removed? We cut off the broken section, buried it and used it for a support it at the other end of the fence, giving it new life.

By the end of the project, everything had come full circle: a deck had become a fence, and I’d completed my first demolition and construction projects. We’d kept heaps of materials on-site, and added a variety of functions and values to the yard. A permaculture lesson was complete, though I suspect that future improvements will carry the lesson further. 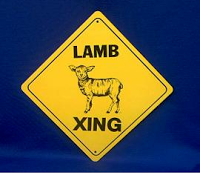 ~ A. Lamb Down Under