Permaculturists share. It is that simple. It is one of three ethical obligations central to the practice:

Care for the Earth
Care for people
Share the surplus
When we started this project 15 months ago we had nothing to share other than our enthusiasm, our knowledge and experience…and some empty bedrooms. This just happens to be the formula for internship, and we welcomed our first awesome interns John and Amy a year ago right now.

They were absolutely amazing interns and we are grateful for all of their contributions to our project and to this blog. (Example of John’s post. Example of Amy’s post.) Along time went by and then Tom came to us late last year. (Example of Tom’s post.)

While Jiquao has not yet written a blog post, he has done everything else that we teach our interns in the first days with us. The number one skill we teach is pulling and straightening nails. This takes place on day one for all interns. Not only does it teach a valuable skill (there are specific techniques involved), but it also teaches respect for materials, humility and patience. (Think “wax on / wax off”.)

If possible, we use the salvaged timber and nails to build something right away to teach more skills and let our interns participate in the transformation from rubbish (according to someone else) to something functional and beautiful. 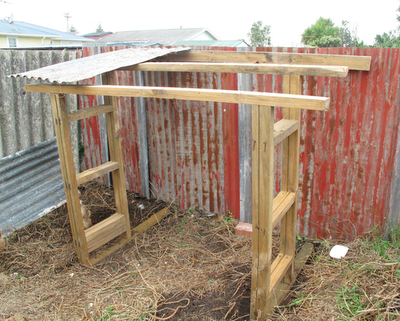 Another skill we teach all of our interns is scything.

Although our section is a mere 700 square meters, we have an abandoned patch out the front of 300 square meters where we can teach scything and encourage the growth of legumes such as bush lupine.

To the right of Jiqiao is a bush lupine, which takes nitrogen from the atmosphere and fixes in the poor, sandy soils. To the left of him is a living hedge consisting of 8 feijoa trees, 8 Jerusalem artichoke plants (sunflower family) and a loquat. These are all relatively wind-tolerant, and so they do not require the protection that we’ve given our 24 other fruit trees. They are planted in a berm of compost built by John and Amy last year. We use the grasses cut out the front to mulch the berm to suppress weeds and retain water.

The final skill we make sure to teach all interns is composting.

We use a hot composting system that has been successful at quickly processing a dead goat, dead ducks and – in this particular barrow load – our oldest chicken, Helen Clark. 😦 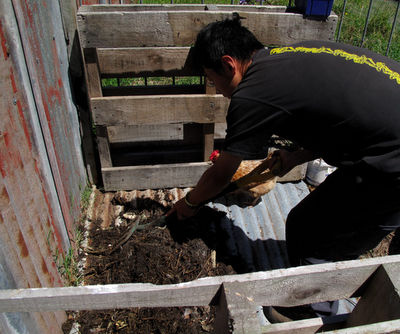 Composting is so important to teach because of its role in building soil health and reducing wastes sent to landfill. As well, it teaches humility and patience.
I submit that permaculture is not a set of principles to memorize and apply, but a way of seeing the world and interacting with it. It is a holistic view that contrasts starkly with the dominant reductionist Western paradigm. For those young people who are interested in coming to work and learn with us, it is a slow, experiential learning process. It involves working, reading, talking, reflecting and writing. We feel obligated to offer this opportunity to young people who are willing to think outside of the square and get their hands dirty. We can offer plenty of both here.
On a final note, each of our interns offers us their unique being. We learn from them, we laugh with them, and sometimes we play with them. We will remember Tom for his contributions to our Athletics softball team. We will remember Amy for her fence and incredible painting hanging in our lounge. We will remember John for his sunburn and his unbeatable work ethic. And, so far, my best memory of Jiqiao from last week was when we were underneath the house to do some minor plumbing work and prepare to sister up some bearers. As I explained to him the difference between a post, a bearer, a joist and a plate, he laid on his belly in the dark, covered in spiderwebs among the cat poops taking notes on his Smartphone. Priceless!
Peace, Estwing