For the last couple of weeks, I’ve been writing about many of the aspects and levels of ‘resilience’ addressed by eco-thrifty design thinking. One of those articles focused on the peace of mind provided by a low-energy and low-resource home, and the other talked about the growing global movement towards resilience to storms: both literally in terms of damaging storm surges such as Hurricane Sandy in New York, and figuratively like the damage caused by financial ‘storms’ such as the global financial crisis which appears focused in Europe.
While examples of resilience can be gleaned from around the globe and connections can be made to our local context in Wanganui, I do not mean to overshadow another important component of eco-thrifty design thinking.
There is no reason things cannot be made as beautiful as they are resilient.
This also gives me the opportunity to thank Terry Lobb for her kind words three weeks ago when we swapped columns. Terry wrote about the aesthetics of our $2,500 eco-thrifty kitchen by focusing on a number of key elements including the cabinets over our hob with their leadlight doors that reminded her of fantails.

I love fantails, I love those leadlight doors, and I love where we got them: Hayward’s Auctions. Not only is the weekly auction great entertainment, but bargains can be had of an eco-thrifty nature: low cost and high performance. We paid a fair price for the leadlights – about $50 for the pair – but ended up with a design element in our kitchen that punches above its weight. In other words, the value we receive from these beautiful doors far outweighs the price we paid for them.
This is not to ignore, however, the fact that we had to sand back the wooden frames, and then carefully apply two coats of primer and two coats of paint. The other thing I had to do was build cabinets to suit them. It took me nine months from purchasing the doors to realize the cabinets had been here all along. I just had to remove part of the forest to see the trees.
During the process of turning the old kitchen into the new bathroom, we had to take down the old cabinets with their classic 1950’s Kiwi-mint-green doors. While that color is bound to make a comeback one day, it is not today. 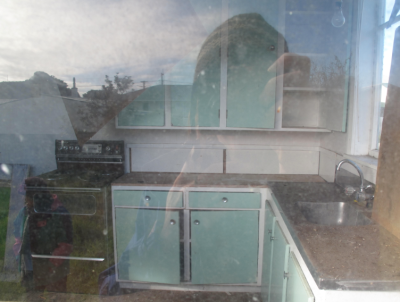 We removed the unit and put in a back room to serve as miscellaneous shelving. And there it sat until one day, for no particular reason, I had a vision.
The vision was that by cutting away at the cabinet and reshuffling some of the bits, this old rimu unit could see new life in a new kitchen in the same old home. The process was almost exactly like pruning a tree, a process that also starts with a vision. The series of photos show how the process unfolded.

First, I removed the Kiwi-mint-green doors and took the cabinet outside. I carefully measured and marked where I wanted to remove parts of the old cabinet that was too big for our new kitchen.
Next, I pruned away some off the length. 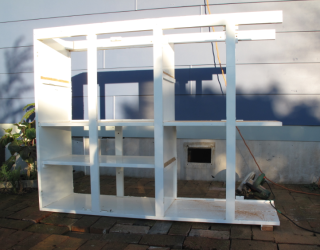 Then some off the height. 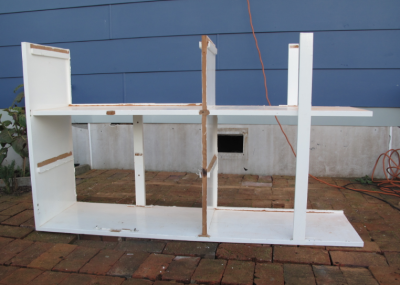 Then – and this was the hardest part – I had to reshuffle some of the bits so that the new, smaller doors would be centered on the pruned (smaller) version of the cabinet.

Like any form of renovation, the work may proceed slower than building something new because we are forced to work around pre-existing elements. However, when care and time are taken, the results can be worth the effort.