Tonight Nelson competes in the final round of The University of Waikato’s Three Minute Thesis Competition. He is one of eight finalists out of a field of 60. The prize? $5,000 towards research-related expenses. (A wedding is research related, right?) I would say “break a leg”, but he already has a possible broken rib after a rough surf session two days ago, so I’ll just say “Wish him luck!”.

Hooray for 350 actions all over the world! Hooray for 350 people getting together and choreographing a dance! Hooray for that being 10% of our town’s total population! Hooray for living in a town with all of these zany fantastic people!

Want to know what I’m talking about? Check it out!
Raglan (Whaingaroa)’s 350 Action organizaed by the Whaingaroa youth movement.

By the way: Two of the main dancers- Connor, the boy in the blue shirt, and Molly, the dark-haired girl in the white shirt- are part of our Solscape family. Hooray for them!

Today is the International day of Action for Climate Change sponsored by 350.org. (Well at least it is here already, those of you in other time zones still have a few hours left to prepare your action). Actions will be going on all over the world to let politicians and big business know that we are serious in our demands for action regarding climate change. I hope that everyone has a fantastic 350 day. We certainly did here in Raglan. If you don’t have plans yet, don’t worry there is still time. And, likely there is an action going on right in your neighborhood. Go to the 350.org website to check it out.

Here’s how we spent our day: 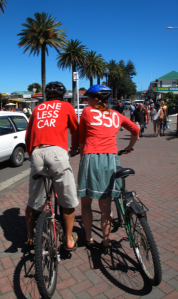 Of course we rode down…. And got dressed up for the occasion. 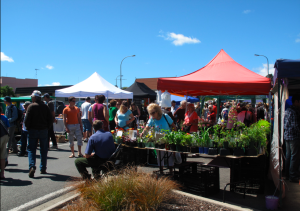 Hooray for the market… No pesto though, boo. 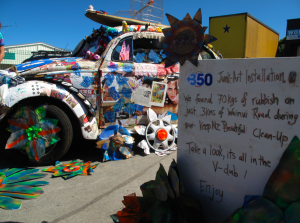 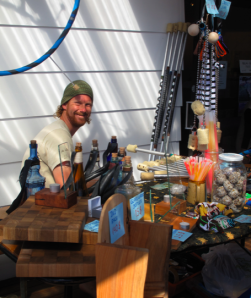 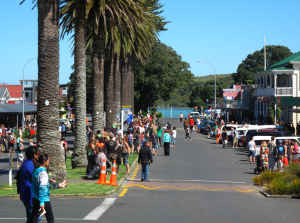 Hmmm… lots of people around. Must be the start of summer. But it kind of looks like they’re all waiting for something. What’s going to happen? … Stay tuned.

Since we have consistent internet, no tv, and no radio, we listen to a lot of internet radio. New Hampshire public radio, the BBC, and the KunstlerCast are some of our favorites. Recently we came across a new one called AgroInnovations.

And guess who they invited to be their guest this week? That’s right, your favorite kiwi farmer/teacher/student (and mine). You can listen to Nelson’s world wide web debut here. He’s trying no to let it go to his head.

So I open up the internet browser at work and Google home page pops up with the latest headlines. While I normally skim them and move on to complete my always reception-related duties quickly, yesterday two headlines caught my eye (delaying my Lexulous moves for at least a half hour). 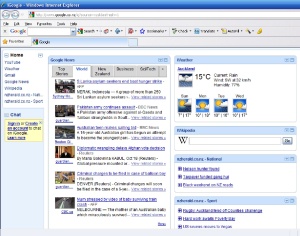 Bottom left: A woman let go of her baby carriage on a train platform allowing the baby to fall over the edge just as a train pulled into the station. Don’t worry the baby is fine, but I watched the video about a dozen times and still don’t understand how the kid survived. Unbreakable?

And center right. I’ll zoom in so you can read this one yourself. Top headline from the NZ Herald.

Didn’t the elves and the dwarves team up when it really counted? When the ring was going to fall into the hands of the wrong crowd, didn’t they band together to keep it safe? I wish I knew more about the Lord of the Rings to keep this parable going. On second thought, no I don’t. I’ll have to switch to terms more appropriate for middle earth(?).

You see, here in the real shire there has been a bit of a skirmish brewing between our two local populations. What’s on the line? Is it nuclear testing? Nope, we all agree on that one. Is it the importance of fish and chips to a regular diet? Nope, we agree on that one too. What issue could be so important that it has fractured parliament and furthered the rift between the two cultures of this peaceful nation?

The Rugby World Cup, of course.

You see, apparently World Cup rugby is so important that it is every kiwi’s right to watch it. That is why the National (conservative government) just had to step in when the tv station that won the right to air it could only provide free coverage to 90% of the population.

Wait, the government stepped in by funding other two other companies’ bids with tax-payer money?

Wait, they told the other companies how much the first company had bid so that they could make sure to win?

Wait, the first company was Maori-TV and the others were pakeha (white) networks?

Ummmm… so all this amounts to illegal activity by the government to spend tax-payer money to ensure that a Maori owned tv station does not win rights to the biggest sporting event in the nation. Quick John Key… back track, back track.

Could you imagine if the US government gave one of our major networks millions of dollars in public funds to block a black network or women’s network from gaining coverage to a major event? It’s crazy. It would never happen.

It’s pretty overt racial discrimination. Luckily, Merlin realized this and took things into his own hands before riots broke out in the streets over the quiddich match (wrong fantasy reference, I know). Let all elves, dwarves, orcs, and hobbits enjoy and be merry.

Someone told me that there is no civil court system in New Zealand. I don’t know if that’s true or not, but it certainly seems like the thought of liability doesn’t even cross people’s minds here. For example, can you think of a U.S. zoo where you can do this? 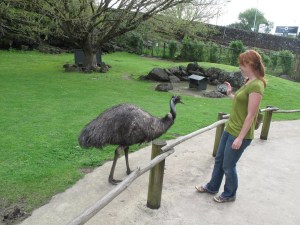 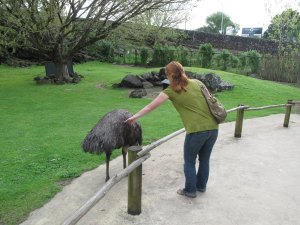 While this guy just chills about 5 feet away? 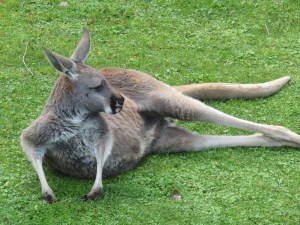 If I look suspicious its because I was being “a giant baby”. Sorry, I guess I was just pampered by being raised in a country that puts guardrails on roads on the edges of cliffs, warns people when they might be in danger of tsunamis, and actually puts fences around the animals in zoos.

House-sitting, always provides us with a welcome opportunity to expand our minds by choosing from one of the three quality programs we get via antenna (yes, you can still watch tv by antenna here, and no, we don’t only get three channels, we actually get 12, but they all choose to show the same three shows… go figure). This week we have enjoyed Outlaw Bikers, apparently a Canadian production (Canadian bike gangs?), and The Hottest Place on Earth, a programme brought to you by the BBC. The extra “m” and “e” are for “mighty entertaining”. Nelson has actually adjusted his life to make sure we are home to watch the next episode of this one.

As good as those shows were, it was a commercial that actually had us staring slack-jawed at the television. I wish I could embed the commercial here, but alas kiwi dumb commercials don’t make it to You Tube as fast as American ones. Luckily you can watch the whole thing via their website.

I don’t want to ruin it for you, but Vitality 4 Life sells vibrating “excercise” machines. You know the kind that shake you not-so-gently so you can shed pounds. Lee-Anne, a fitness expert, tries to convince us that we too can get fit, without even breaking a sweat.

I was kind of with her here. 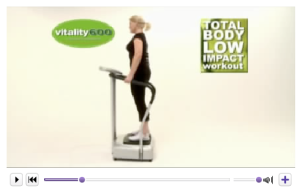 And even here. I mean she is holding up her own weight at least. 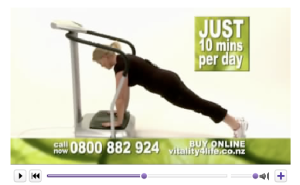 Here’s where it got a bit fishy. 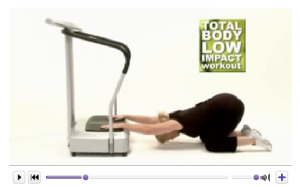 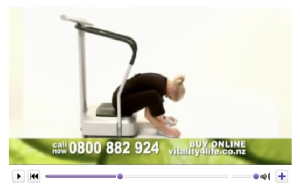 Oh yeah, new FTC standards require that I let you know if I am being compensated by this company for promoting their product. I wish. If I got one of these I could work out with a donut in one hand and meat pie in the other. Sweet as. 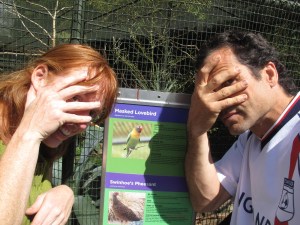 After 40 days of rain we headed for higher ground. We are in our “city house” for the next two weeks, perched at the top of a hill overlooking Raglan harbor. It’s sunny and we’re house sitting for again. Life is good. 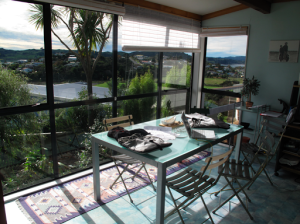 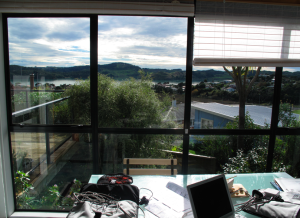 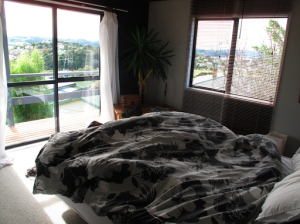 Our bedroom with a view. 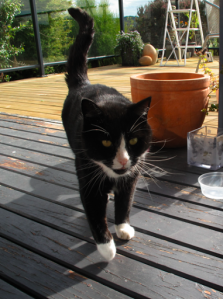