When I first started planning our wedding I was torn between a camp wedding and farm wedding. We nixed the farm idea when we couldn’t find a farm that would actually grow our food on-site without costing us an arm and a leg. After some turmoil and a lot of research, we ended up at Indian Head Camp. Are you ready for some knock down gorgeousness?

And here comes a huge bridal blogging fail. I like to think it is a testament to how much fun everyone was having, but I hardly got any pictures of the venue from anyone during the whole weekend. Lots of pictures of the wedding. Lots of pictures of us having fun. But hardly any of the camp itself. I didn’t even get a picture of the cute sign they made that said “Dani and Nelson’s Wedding” that was waiting for us when we arrived. Sigh.

Well hopefully this hodge-podge will give you an idea of what we saw when we arrived on Thursday afternoon.

The sun was shining, birds were chirping, and an army of staff were waiting to make our weekend incredible. There were cabins waiting to be filled with our guests.

And that one, just there on the lake shore, that one was for me and Mr. Veggie. They had turned it into a cute little honeymoon suite, with a double bed and linen and a minibar with snacks. Of course I didn’t get a picture. Grr.

There was a lake ready to be skied on, canoed on, and swum in. 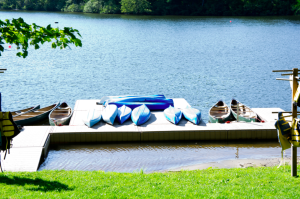 A field ready for softball.

And another one ready to become our ceremony site.

There were ropes ready to be climbed. 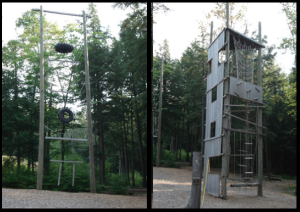 And a dining hall and canteen to decorate. 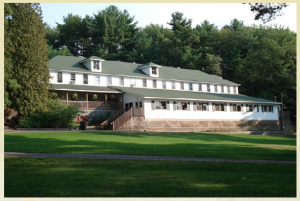 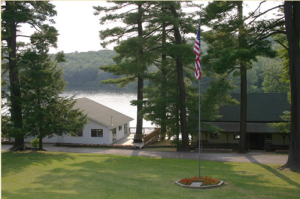 There was even a wee little tipi and fire pit awaiting some late night shenanigans. 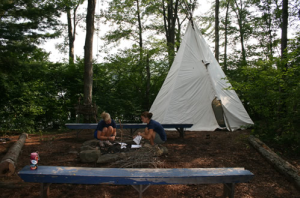 photo: Indian Head Camp
This was the first time Mr. Veggie had ever seen the venue, and only my second time. Before our families arrived we took some time to walk around and get a feel for the place. It was then that we saw people there from the other group. Ummm what?!? Other group?

Yeah, turns out that because we were having very small numbers on Thursday night the camp decided that another group could be booked for that night through lunch the next day. Without letting us know. At first I was annoyed, really annoyed.

But then I just thought, “Whatever. We do have a really small group here tonight, only our immediate families. They wont care that there are other people here. And there’s nothing I can really do about this”. So, I just let it be. And I chose to be happy and indulge myself in the beauty of the place and the fantasticly good vibes that the staff were sending our way.

Were there any unexpected hic-ups when you arrived at your venue?