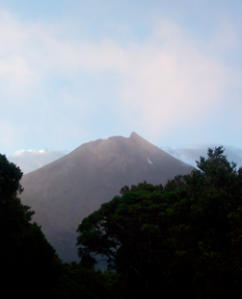 Although us interns are eager learners and hard workers, occasionally we do enjoy a trip off the old Castlecliff block. A few weeks ago, John the Intern and I decided to engage in our first real Kiwi travel adventure, a trek around New Zealand’s most-climbed mountain, Mt. Taranaki. We chose to follow the upper-level circuit, a route that circumnavigates the volcano through alpine meadows and scrubby ridges, as well as temperate rainforest, flooded gorges and gravelly slips. 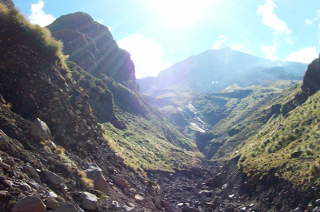 The four-day adventure began with a hitchhike out of Wanganui. After putting our best thumbs forward for 45 minutes, we finally secured a ride. Our hitch was a very enthusiastic man, an off-duty truck driver that loved racing down the winding country roads at 120 kph. After bringing us to his daughter’s house for a cup of coffee, he insisted on delivering us straight to the trailhead. Unfortunately, he did not have the best grasp of the area, and we ended up missing our turn several times and driving a complete loop around the mountain; we didn’t get on the trail until 2:30 pm. To top it all off, we ended at the wrong visitor’s center, and since it was a Tuesday, it was closed and we were unable to secure ourselves a map. Instead we sketched a rough one of our own on a scrap of paper borrowed from the visitor sign-in log. 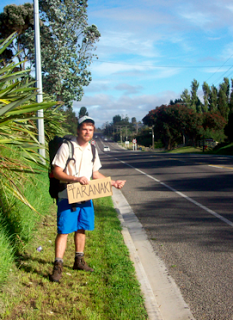 Since our drop-off landed us a couple hours further from our destination hut, we started strong and booked it toward Holly Hut. It was quite hard to judge our position relative to the hut, as two signs that were an hour’s worth of hiking apart both reported the hut as being 3.5 hours away. We finally rolled in around 8:15 pm, with very little remaining daylight. A nice Belgian couple greeted us, and we discussed our respective trips, made dinner, and went to bed. 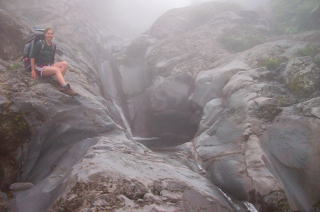 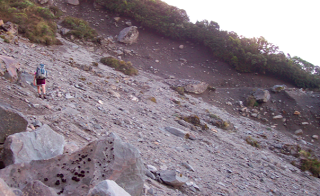 The next day we had a bit of rain, meaning soggy shoes and clammy clothes. However, we saw some incredible temperate rainforest and gained some decent altitude, and the warm crackle of a wood fire that welcomed us at our second hut made it all worth it. The man who made the fire also greeted us, standing naked in front of the hut when we arrived! His name was Mario, a native Austrian turned German army man who claimed to beat all the estimated hiking times on his map by two hours. Waiaua Hut had a great view of a gorge below, and afforded us a restful night’s sleep and the opportunity to dry our gear before completing our circumnavigation of Mt. Taranaki.

The third day started with a rapid ascent to a narrow ridge: it was just wide enough to house the trail with a tree on either side, and sloped abruptly to oblivion just beyond. We continued to climb on hands and feet, onward and upward, as my calf muscle conveniently deciding to start seizing up. 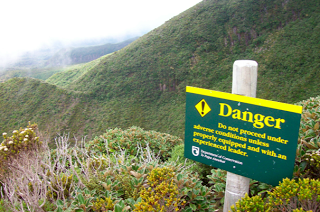 Nevertheless, we continued onward, and decided to make the quick jaunt up Fantham’s Peak and stop for lunch at the summit. Let me tell you, this was the hardest I have ever worked for lunch in my life. Mario was quite ill-informed when he estimated that the trek would take about 20 minutes; I guess the trail maps warn “not to scale; not to be used for navigation purposes” for a reason. After a long set of wooden steps that I affectionately look back on as the Stairway to Hell, the trail became a field of volcanic gravel, or scree, situated on a 45-degree or steeper incline. My chosen method of ascent was to take two steps up, slide back one, complain, take a deep breath, and repeat. John fared quite a bit better, scrambling steadily up and patiently waiting for me at the trail posts and boulders where it was safe to rest. 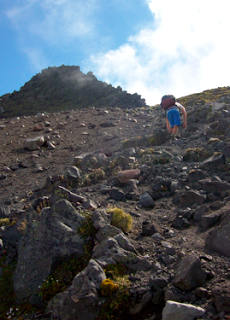 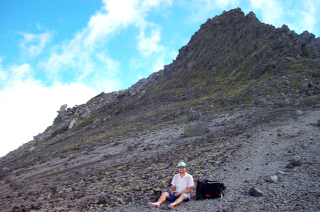 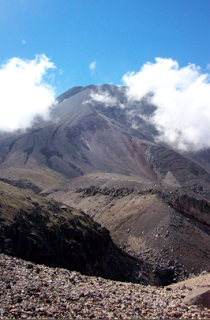 We finally arrived at the top of the major rise, and mutually decided that was a sufficient stopping point. To our left rose the much higher peak of Taranaki, whose presence demanded ever more respect after the comparatively minor ordeal we just endured. In of us stretched a blanket of billowy clouds and the farm country below, and behind us was a rocky ridge of what looked like jagged teeth. We had run out of water and decided not to continue on, but we found out later that just a little farther on, at the true summit, was a hut! Anyway, we finished the third day as we descended down to Dawson Falls once again. 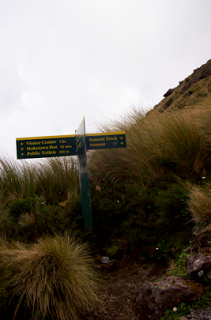 We had completed our loop in three days, while most people take 4-5. We camped out the third night, and finished off the final day by hiking over to North Egmont (the British name for the mountain) Center for a hitch home. When we came to the sign for the Taranaki Summit Track, we decided somewhat disappointedly that there wasn’t time, or the wherewithal in my left calf and knee, to make it to the top and back in time for a hitch home. However, with all things considered, it was quite a successful feat. The rewards far outweighed the trials, and primed us for further tramping adventures in the coming months. 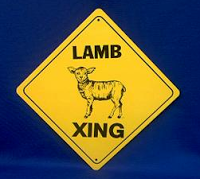 – A. Lamb Down Under