Alliteration is about connecting and emphasizing words and sounds. Permaculture is about recognizing and maximizing beneficial relationships while minimizing or eliminating harmful ones. From my perspective, oil is doing a lot of harm to our planet, many of it’s living inhabitants and especially certain regional human communities. Of particular concern to me are the tar sand developments in Alberta, Canada. Talk about a carbon footprint and water pollution! My heart goes out to the native communities effected by these disastrous projects. In case you missed it, a 1,700 mile pipeline is proposed from Alberta to Texas and the final public hearing is in Washington D.C. today.

Meanwhile, we have our own oil catastrophe off the coast of Tauranga…

… and ongoing concern about deep water (sound familiar) oil drilling off the coast of Taranaki, and fracking around Mount Taranaki itself. I know lots of people who are gutted by all of these developments. Last March/April heaps of people drove to the East Cape to protest the Orient Explorer (under contract with Petrobras) doing a seismic survey of the Raukumara Basin. A friend of mine who is a professional geologist and amateur renovator and gardener pointed out how ironic it was that people drove all the way to the East Cape to protest the potential extraction of oil from the earth.
It is hard to disagree with him, but from my experience there is nothing a Greenie hates more than to have their own hypocrisy pointed out to them. Best to stay away from it. That is one reason that I push the economics of sustainable living over the environmental arguments. It is clear that world leaders are not willing to take serious action regarding climate change so why expect average citizens to do so? Many, many people have no problem arguing with science, but they may find it harder to argue with maths. For example, electric rates in NZ have increased just over 7% for the last 8 years. This translates into a doubling time of just under 10 years (using the “Bankers Rule of 7”). There is no reason to think that this rate will go down in the foreseeable future. Meanwhile, rates are set to increase in the USA as well.

And, in another meanwhile, both countries face inflation that outpaces wage increases. This means every year the gap between income and outgo narrows. Most Kiwis and Yankees have to live on less and less as time passes. These are mathematical truths. Can’t much argue with them, although undoubtedly some will try. 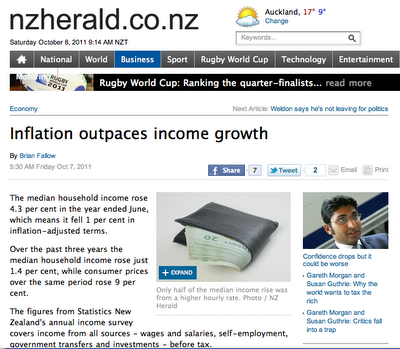 For reasons known only to people who want to influence “consumer” sentiment, food and energy are not included in US inflationary data. None the less, food and energy prices continue to rise with a high degree of correlation. 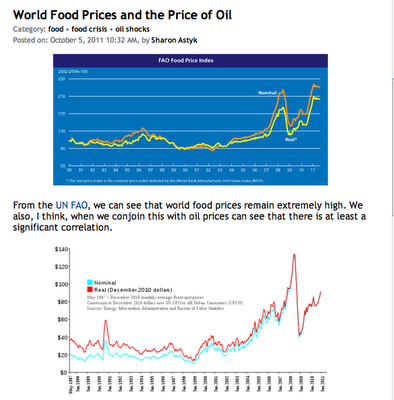 Back to permaculture and minimizing or eliminating harmful relationships. For most people living in OECD nations, oil, electricity and food come from “away” and are subject to volatile yet increasing prices controlled by people outside of their communities. The relationships between people and energy, food, lifestyle, comfort, security and quality of life are complex and variable. But the current mathematical reality indicates that the more that lifestyle and comfort rely on energy and food “from away,” the greater the risks to lifestyle, comfort and quality of life. From this perspective, the relationship between volatile and increasing energy and food prices and quality of life will be an increasingly harmful one as long as individuals, families and communities rely heavily on energy and food from outside sources.
The Eco-Thrifty Renovation seeks to demonstrate that humanity’s harmful relationship with energy (and particularly oil) can be greatly minimized not just for environmental reasons (ie, climate change, oil spills, etc.), and social reasons (ie, Alberta indigenous communities, low-lying Pacific Island nations, Louisiana fishermen, etc.), but also for economic reasons. Here is a thought experiment:
How would your life change if tomorrow the cost of your electricity, food and petrol doubled?
Think about it for a minute.