When many people think of renovation they think of kitchens and bathrooms. It is not uncommon for Kiwis or Americans to spend over $20,000 on such projects. The perception is that such investments will increase the resale value of the home. Under an outdated paradigm this may have been true. But now, as many are aware, conditions have changed.
Instead of splashing out for a flash kitchen and a flash bathroom at $20,000 each, we have invested about 10% of that in each and spent the bulk of our money on insulation, solar hot water, a multi-fuel stove and a new roof. But what, you may ask, does a $2,000 bathroom look like? You’ll find a run-down below. But first, the “before” picture. 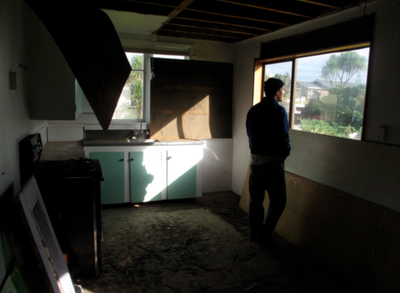 This “room” had been the kitchen with a painted timber floor and a hardboard ceiling, most of which had been removed, with some sheets still in the removal process aided by gravity. The corner of the room to my left now looks like this.

Toilet: $99 at the Renovator’s Centre

Medicine Cabinet: Mirror ($15 at Hayward’s Auctions) and Drawer ($1 on TradeMe) 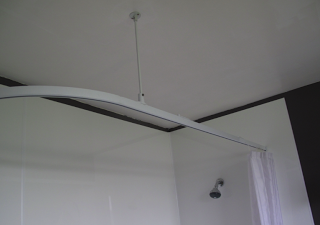 I’m not including the price of the washing machine because that is not a usual bathroom expense. I’m also not including the cost of replacing the ceiling because most people who spend $20,000 would not to have to replace their ceiling either. This is not meant to be the definitive eco-thrifty bathroom, as the available second hand resources will always vary. This is about as good as we could do in our particular place at this particular time while following the NZ Building Code and keeping down costs and ecological footprints.