It would be naïve to suggest that the type of win-win-win thinking associated with eco-thrifty renovation is new or original in any way. Over 200 years ago, a famous American coined the phrase, “A penny saved is a penny earned.” Many older Kiwis would simply call it “common sense.”
But sometimes common sense can be awfully uncommon. For example, last week I was doing a home energy audit in Saint John’s Hill at a home built in the 1950s. It had low ceilings with pelmets stretching down to just below the top of the windows. But sometime during the last half-century, the insulating curtains and curtain rails were removed and replaced with vertical blinds that offer virtually no insulation. I suspect this coincided with an era of cheap electricity and a changing aesthetic.
But what goes around comes around, and while I will not argue that pelmets have come back into fashion (yet!), by most accounts, electricity is no longer “cheap,” and the woman for whom I was doing the audit has decided to replace the vertical blinds with thermal curtains. Her decision-making was based on making her home warmer, reducing condensation, saving power and money, and reducing her impact on the environment, however small that may be.
This is an example of an ordinary Wanganui woman exercising the eco-thrifty, win-win-win part of her brain. But she is not alone. Almost everyone, I would argue, practices eco-thrifty design thinking on a daily basis, sometimes without even noticing it. For example, the car park between the Boys and Girls Gym Club and YMCA Central has a few spaces under a large shade tree that fill up before the un-shaded spaces.
This qualifies as eco-thrifty design thinking because it: improves human comfort; saves petrol (by not having to run the air conditioner on high when starting up a hot car); and, saves money because less petrol is used. Other employees at YMCA Central practice eco-thrifty thinking by riding bicycles – and in one case an electric bike – to work. 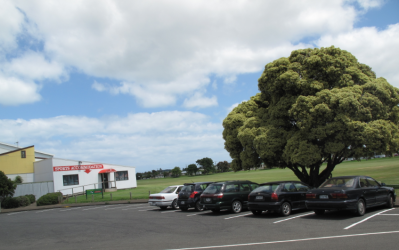 In all cases above, individuals appear to recognize one, two, or all of the components of the sustainability triangle: human needs; economic viability; and ecological health. I would argue the first two components are examples of enlightened self-interest. In other words, living better while saving money may be considered by many ‘selfs’ as in their interest.
But this type of thinking appears to break down when government gets involved. Spending other peoples’ money appears to be different than spending one’s own, and decision-making that suits the sustainability triangle appears to break down.
For example, I’ve been noticing the lights outside the Central Library burning all day long since I moved here two and a half years ago. The good news is that they are compact fluorescent light bulbs. The bad news is that it still costs rate-payers about $230 per year for running these eight outdoor lights during daylight hours underneath a skylight that lets in free sunlight. I raised this issue at the library over two years ago and was told they had no ability to turn out the lights. 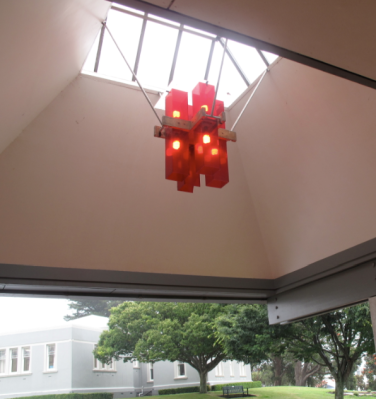 Another example of the unsustainability of government decision-making is so comical that it deserves to appear in the New Zealand Herald ‘Sideswipes’ section, if the ‘new look H’ still has it. Last week, I went up to Hamilton to defend my PhD thesis (call me Dr., now), and took a side trip to Raglan to visit friends and surf. And there it was, sitting on the beach in all its glory: a blatant example of unsustainability proudly bearing the web address: sustainability.govt.nz. 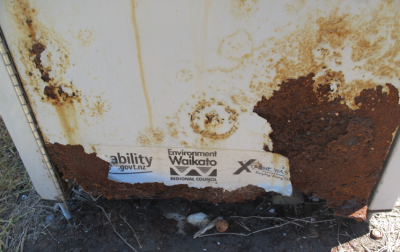 To the best of my recollection, the rusted recycle bin has been in place for less than four years. 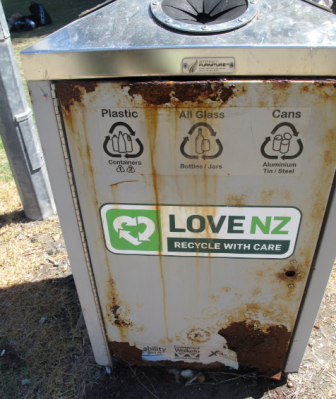 Someone please answer this question: If the government requires me to use stainless steel nails on my home 200 metres from the Tasman Sea, why would it place a non-stainless, non-galvanized recycle bin within throwing distance of a body of salt water in a region known for strong, seasonal onshore winds?
These are both examples of other people spending your money. Does anyone think either one is: a) enlightened; b) in their best interest?
Grrr, Estwing