Two weeks ago I wrote a column in which I featured Castlecliff Beach in a design exercise of eco-thrifty renovation. The exercise was used to demonstrate that ETR principles can be applied across a broad spectrum. Among the core principles are working with nature instead of against it and investing money up front to save money over time.

While the above design principles embody both the ‘eco’ and the ‘thrifty’ of ETR, the column was written to include some more universal design ideas: ‘form follows function’, and designing to scale. Although these design ideas have been around for a long time, they can still be applied through new lenses.

As our cultural perspectives evolve, so do the ways we apply tried and true beliefs. For example, think about a baby’s nursery. Is the space designed for a crawler/toddler or for an adult? 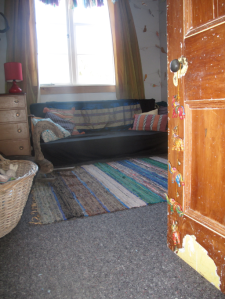 Many of the nurseries I have seen tend toward the traditional, magazine-photo-shoot variety. They are painted either pink or blue, they are tidy, and everything is set to adult height. As a way of thinking outside the square this week, I thought I would share our perspective on a more child-centred nursery design for our daughter, Verti.

Like many parents, our aim is to keep the ‘mess’ confined to her room. While this has not been accomplished yet, our design thinking was to make Verti’s room the most desirable place in the house for her to play. We did this by using a number of toddler-centred design elements that are lacking in other parts of our home.

For example, Verti’s room is the only carpeted one. A quality off-cut wool carpet and thick underlay purchased on TradeMe make the floor – where she does most of her playing – both warm and soft. The carpet remnant was more than twice as long as Verti’s room but only half as wide. We fit it to the room as needed and then hid the seam with furniture and a colourful area rug.

Colour is another way we tried to entice Verti to play in her room. The Moroccan palette was inspired by a hanging string of elephants from a fair trade shop. 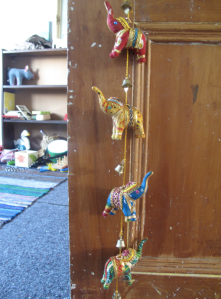 Dani bought the area rug to match, and we reused paper lanterns from my parent’s 50th wedding anniversary party to take advantage of the 12-foot ceilings in a fun way. While those colourful paper orbs may seem miles above her head, everything else in Verti’s room is designed to her scale. 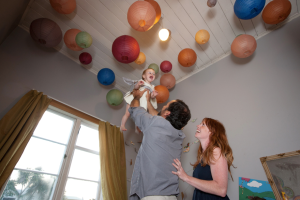 Two habits we want Verti to develop are choosing her own entertainment and putting things away after using them. To these ends, we have five toy storage areas in her room that she can access. These include a low shelf (secured to the wall for safety), two draws under her cot, a large toy basket, a rack for her play scarves, and a driftwood tree limb for her bags. She can access any of her toys whenever she wants, and has just begun putting them away too.

Additionally, the low couch – really just three cushions and a cleverly made wooden frame – has been a big success. Verti loves being able to climb onto it easily and act ‘grown-up’, and we love sitting on it with her and reading stories.

The bottom line: Almost the entire world is designed by adults for adults. We wanted Verti’s nursery to truly be a child’s space and we think we have accomplished this. Whenever her little friends come over they immediately head for her room, and recently one of their dad’s lay down on carpet and said, “I really like this room. It invites you to get down to their level.”