We’ve just passed the third anniversary of the arrival of our first two interns. John Wright was a former student of mine from my high school teaching days, and Amy Lamb came to us through her uncle, a good friend and groomsman at our wedding. They were both in their early twenties when they arrived in Whanganui in late summer, 2011.

We were in the heart and guts of our renovation: ripping open walls, adding insulation, hanging Gib and weatherboards, installing solar hot water. Much of what we were doing at that time required close supervision, as it would be scrutinized by our building inspector. I’ll admit I was a bit of a taskmaster, which went over better with John than with Amy.

John had come to us straight after 4 months on a lobster boat off the coast of Maine through a Northern winter. Amy was fresh out of uni, and looking for a gap year type of experience.

By the time they left us, both had experienced transformative learning experiences on different levels. John returned to the states and immediately took up a lease on a two-acre organic vegetable farm. Amy took a job with a conservation organization, enrolled in a permaculture design course, and now works with a sustainable forestry consultant.

Transformative learning theory stipulates that in order for one to transform their perspective they must first recognize that something is wrong with their current perspective, then look for alternatives, and eventually adopt a new worldview. For those like John and Amy, the Western consumer lifestyle messages bombarding them on a daily basis did not satisfy their need for meaning.

They came to us and experienced some alternative worldviews such as sustainability, permaculture, and what we call eco-thrifty living. For the first month they spent with us, most of their ‘transformative learning’ took place outside of our nine to five workday dictated by the NZ Building Code. It took place over the dinner table, in the garden, and even during our weekly trips to Hayward’s Auctions.

But as the pressure of pre-line and post-line inspections waned, I allowed John and Amy to select from a long list of non-consent jobs to engage with while I got back to writing my PhD thesis. 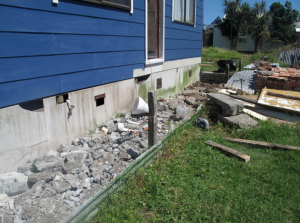 After building our outdoor pizza oven together, John embarked on laying second-hand brick for our patio and Amy set herself to constructing a fence. I’ll share John’s experience this week and Amy’s next week.

In my 14-year teaching career, John was one of my top 10 favourite students. Although not a strong academic, he always worked hard, had fun, and was open to new ideas. He was just an awesome kid.

I had no problem telling him to build me a patio and trusting he would do a good job. The bulk of the work involved carting many wheelbarrows of sand to fill and level out the trench beneath the former deck that was full of rubble and rubbish. John was the perfect candidate for this job because he was strong as a horse, but also carefully used a leveling line to place each brick. John took ownership for the job and followed through with an amazing result more or less on his own.

The project is a good example of eco-thrifty renovation because it involved second-hand materials, local materials, and free materials. With a little vision, hard work and patience, the bricks that made up a chimney in a Gonville home are now our patio in Castlecliff. What a transformation.