This week we finally finished a big project: the water storage area/duck pond we mentioned in our first post. The pond area is a great example of permaculture practices as it benefits many different elements of the farm and each aspect of its design works to produce various desired effects. 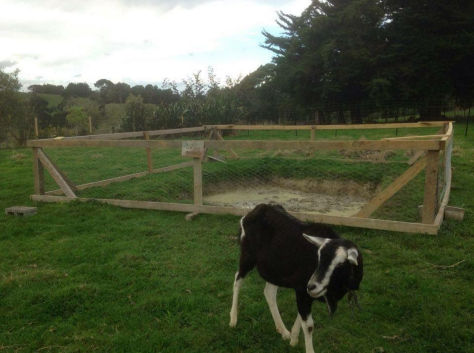 To start with, it would be unfair of us to explain the construction of the pond without first giving credit to Marina and Heloisa, the interns at the Eco School before us. The hole in the ground that forms the centre of the area was already roughly halfway dug before we even started, making the initial process of digging somewhat easier; a huge benefit to us as the digging was of course the bulk of the work. It took perseverance to complete, but gave us lots of clay and topsoil to use in other areas of the property (the topsoil was added to an area where avocados will be planted later in the year and the clay to stabilise a bank below the garden). We were pretty excited when it was finished and left a little ramp of clay in one corner just to make sure that even the least athletic ducks could make use of the facilities.

The main aim of the pond is of course water storage and the necessity of this has become evident very recently. Winter in Wanganui is wet and the pond has filled up at an alarming rate over the last few weeks. There is a lot of surface water on the farm making the ground very boggy and as this area is prone to landslides storing the water in a safe area where it can be accessed, such as the pond is all the more important. The water has been converted from a potentially dangerous liability to an asset with multiple uses. It also looks rather nice and provided a temporary mud pit for the kids to play in during its construction.

Before we arrived at the farm Nelson propagated some willow trees with a view to planting them in several locations around the property to use as a windbreak. We decided to plant some of them around the pond so as to stabilise the bank, take up more excess groundwater and provide a sheltered area for the ducks to live in. However, due to the location of the project (in the middle of the goats’ paddock), we had to find some way of protecting the young willows from Goatbusters’ tenacious efforts to devour any branches that come his way.

A square fence was the perfect solution, and under Nelson’s guidance we were able to knock together a reasonably stable fence out of a few bits of timber, some nails and several lengths of chicken wire. Despite looking like a bit of very rough carpentry, the fence is actually designed for its adaptability and longevity. Firstly, it is raised several inches from the earth on concrete blocks in order to prevent groundwater from wicking up into the frame, increasing its lifespan. Secondly, the wire encircling it has holes large enough for a duck to pass through but too small for a goat to push its head through. Overall, this creates a great duck habitat whilst giving the willow trees some much needed protection. We also installed a duck house just inside of the frame so as to make it even more tempting for them to move in… 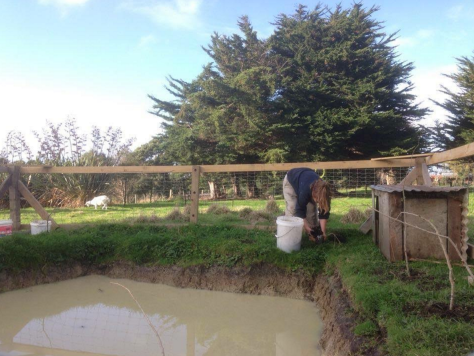 All in all, the pond is a great example of permaculture in practice as it incorporates many key principles – converting liabilities to assets, intelligent water storage and ensuring that any modifications that you make to your property are holistically designed in order to have multiple functions and be as effective as possible.

2 thoughts on “Sophie and Mike Finish a Big Project”