Interns come to Kaitiaki Farm for 8 weeks at a time to earn a Permaculture Design Certificate. That’s not long enough to grow anything from seed to plate except radishes or maybe salad greens depending on the time of year. As a result, we’ve developed a form of ‘paying-it-forward’ from one group to the next in the annual garden, or even from season to season by making and freezing pesto or broad bean falafal or sliced peaches, loquats and feijoas.

One group plants tomatoes that they will never eat, but enjoys crown pumpkin, spaghetti squash, dried chilis, and dehydrated apples grown and prepared by other interns months earlier.

The most recent group has been able to experience much of the best aspects of harvest season and their work in the annual gardens has been relatively light. But instead they’ve been planting natives along the stream, helping put up firewood, and transitioning the beds to winter crops such as broad beans, brassicas and garlic. They have even helped organise and run a Curtain Bank for the Whanganui community, to help low-income families keep their homes warmer during the coming winter months. 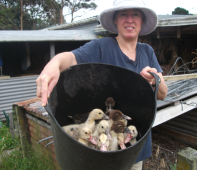 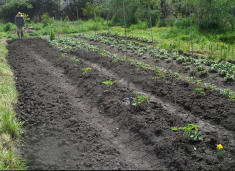 Previous groups have helped with drainage on the land, built animal shelters and chicken tractors, and planted poplar poles, avocados, olives, and around 2,000 native plants. Each group makes compost that will be used by future groups and raises ducklings or chicks that they won’t see as full grown.

Paying-it-forward on Kaitiaki Farm may serve as an example of what is sorely lacking in much of the rest of contemporary human society. Instead of paying-it-forward we see rampant stealing from future generations in terms of biodiversity, climate, and financial debt.

Even during an 8-week permaculture internship one can only learn so much. So instead of trying to ‘teach’ heaps of ‘stuff’ we take the approach of helping to develop a more holistic vision and four-dimensional design thinking skills. As our interns plant vegetable seeds in the gardens and native seeds in pots in the nursery, as instructors we’re planting seeds of the ethical approach to ecological design that is permaculture. Once interns leave the farm we rely on them to spread out across the planet and pay-it-forward in communities worldwide. We need to make sure they are well nourished for such a weighty job.