Here we are in the middle of winter and it’s music trivia time again. If you are under 30, you may want to skip the next paragraph.

Released in 1972, this song was the first and only number one on both the soul singles and Billboard Hot 100 charts for singer songwriter Bill Withers. In 1987, Club Nouveau covered the song and took it back to number one for two weeks on the Billboard charts. That version reached number one in New Zealand in 1987, and earned Withers a belated Grammy award, as a writer, for Best R&B Song. It is ranked number 205 on the Rolling Stone list of 500 Greatest Songs of All Time.

This music trivia question was brought to you by Wikipedia. Any guesses?

The song: Lean on Me.

The moral: We all have our good days and bad days.

The same goes for passive solar homes, especially on cloudy winter days. But there is a silver lining when eco-design is involved. Here is what I mean.

Central to eco-design is working with nature instead of against it. Aside from those people and organizations who prefer wasting money and increasing pollution, we all understand this.

Part of working with nature is understanding the patterns in nature. With regards to a passive solar home, this means sun angles: morning, noon and night; summer, autumn, winter, spring.

The passive solar design of our home takes into account both of these two conditions in order to keep our power bill as low as possible. On fine winter days the sun warms our home to a comfortable 24 degrees, it heats our water, and cooks our dinner on the solar cooker outside on the patio. 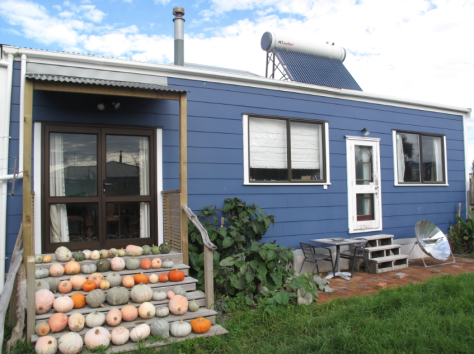 On overcast winter days we can light a fire in the cookstove if needed, which then heats our home and cooks our meals. Wood, after all, is just sunshine one step removed.

In both cases, the result is a warm home and a hot meal without the need to use any electrical power. This can be considered a complimentary design strategy: when one element of the system is lacking another element in the system steps in to help out.

Lean on me when you’re not strong

I’ll be your friend, I’ll help you carry on

For it won’t be long

‘Till I’m gonna need somebody to lean on

It will not come as a surprise that most great teams like the All Blacks design their game plans to take into account the complimentary skills of each player, and to adjust the game plan to take advantage of those players who are performing at their best during any particular contest while others may turn in sub-par performances.

But then again, every Achilles has his heel. In our present home there are days – one or two each month during May, June and July, that we run our of solar hot water and have to turn on the electric element for 20 or 30 minutes in order to take showers. This boosts our monthly power bill from its usual $22 all the way up to $25.

This minor expense of about $10 per year does not justify the cost of connecting a wetback to our wood burner, which would run into the thousands of dollars. In other words, the payback period for a wetback would be many decades while the payback for our solar hot water will be somewhere around 6 years.

However, when we shift homes next week we will be facing a different set of circumstances where the installation of a wetback may be justified. Time, and eco-design, will tell.

p.s. How many TV satellite dishes do you see in the title image and how many solar water heaters?