I crack myself up.

I’m writing this post while my nieces are down for a nap, so it’s going to be short and sweet with lots of pics. Hope that’s ok. Getting anything done with a two and three year old around is pretty much impossible. Don’t even get me started about the disaster that was “helping” Aunt Veggie plant the centerpieces yesterday. That’s a whole ‘nother post.

OK, so I’ve been knocking off wedding projects left and right this week and last night was boutonniere night. Supplies: 2 packages of feathers (pheasant and quail) for about $2.50 each. One bunch of dried yellow flowers about $5. One stem of fake pussy willow about $2.50. One role of floral tape and one spool of floral wire, which will both get used again for bouquet making.

I have no prior bout-making experience, so I kind of just went for it. Here was my first attempt:

I twisted about 2 inches of floral wire around the stem of the feathers and crimped it closed with a pair of pliers. This really helped me have more length to wrap the tape around and made them bendable, and easier to position at the end. I read about adding toothpicks or other hard bits in with the stems to make them stronger, but the dried flowers were sturdy enough, so I didn’t need to add anything.

I made 10 total, for groomsmen, ringbearer, and dads and it took me about two hours. The only thing I have to do now is wrap some nice ribbon to cover the tape and find long pins. With each completed project I feel just a little more relieved.

Let’s have a look at the family scales:

Notice how we all fit on one couch.

Then there’s my family. 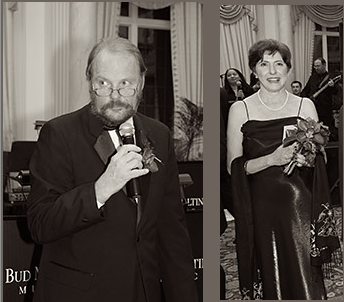 We don’t even fit in one picture. I’ve got steps, halves, dads, moms, the works.

Why do bring this up? Well, because I am going to have all of my sisters as bridesmaids. Since I have moved around a lot in my adult life I have many good friends from all over. My friendships tend to come in waves, stronger some times with certain people, weaker sometimes, mostly depending on where I’m living at the moment, but my sisters have been a consistent force in my life since as long as I can remember. Plus they’re all really rad, amazing women. Who could ask for better bridesmaids?

That means four ladies for me. Mr. Veggie would like to have his brother stand on his side. 4-1.

I also am really close with my (very tall and shaggy haired) little brother. So, he needs to be in the wedding party. I’d love to have him stand on my side, but that brings the score to 5-1.

I guess it would be o.k. if my bro stood with the other dudes. It would also appease his sense of masculinity. 4-2

My brother-in-law (Veggie Sis K’s hubby) is a second brother to me. We even went on a road trip together this past summer without my sister since she had to work. But I feel like if I include him then I should also include Mr. Veggie’s sister-in-law who I also absolutely adore. 5-3

Wait, who’s going to be watching all those adorable little veggie sprouts while us grown-ups are doing wedding party duties? Maybe best to leave out the in-laws. 4-2

Bridal parties don’t have to be evenly matched. Right?

So, do we leave it at that? Four ladies and two guys? Or does Mr. Veggie recruit two extra dudes?

The problem is that a lot of his “dudes” are actually “dudettes”. He has several close girl friends, but not too many guy friends that he feels super close to anymore. The dudes he does feel close to are childhood friends and live overseas, so he feels bad asking them to take a major role in the wedding. Also, Mr. Veggie is a bit older than me, and many of his friends are older than him. Wouldn’t it be weird for one of his 50+ year old friends to escort my 20 year old sister down the aisle?

I don’t know… what would you do?

So it turns out that Mr. Veggie’s fashion insight is stronger than I give him credit for – apparently vests are very in these days. After a short round of internetting I quickly lost any doubts I had about the vest concept. Heck, I’d marry one of these dudes. They look great! 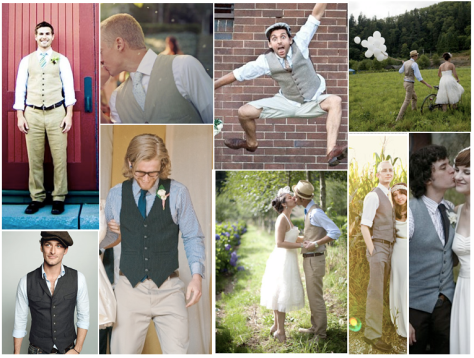 How would a group of such dudes look all together?

I have to approach wedding topics gingerly with Mr. Veggie, lest I be greeted with a roll of the eyes or a throwing up of the hands. (Has Mr. Veggie turned into a teenage girl?)

Attempt#1 (while walking to the beach for a surf)-
Me: So, have you thought about what you might want to wear to the wedding yet?
Mr. Veggie: I thought I might just wear this. (“This” meaning a pair of bright green board shorts with hot pink stars on them that he got for free at the dump).

Maybe that wasn’t the right moment.

Attempt #2 (early one morning)-
Me: Have you thought about what the groomsmen might wear?
Mr. Veggie: Maybe they could all wear sarongs that match this one.

Did I mention that said sarong is so dearly loved and thin that it is see through in some conspicuous places?

Attempt #3 (while working in the garden)-
Mr. Veggie: You know, I’ve been thinking about what I want to wear to the wedding.
Me: [feigning disinterest but internally giddy with delight] Oh, yeah?
Mr. Veggie: I really like vests. I think I’d like to wear one. A jacket will be too hot in August.

A vest? Mr. Veggie doesn’t offer ideas about the wedding too often, and I want to encourage these rare events as much as possible. But, a vest? For some reason this is the image I have in my mind:

Source
Mr. Veggie: I think I like a dark vest with light colored pants.

Whoah. Who is this man? What has he done with my fashion-allergic fiance? A dark vest with light pants. Let me do some research.